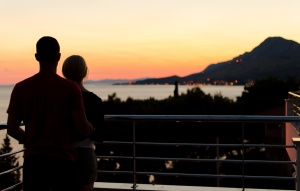 A year ago today you stood before God, family, and friends and promised always to stand by my side.

And yet, my love, I remember a promise made earlier that has much deeper meaning for me. A promise made in private, that no law, religious or civil bound you to keep. On a quiet evening you looked into my eyes and spoke these words, I will do whatever it takes, so that when you look back on your life, you can say ‘I had a beautiful life’. No man has ever worked more diligently, more tirelessly, to keep a promise.

But, my darling, you have already given me a beautiful life. On this day, one year ago, you guaranteed my happiness when you took my hand in yours and called me your own.

I look into your eyes, and I see an honest man. I see the bravery of a soldier. I see the charm of a farm boy. I see the intellect of an academic. I see my future. I see you, my love.

No matter what life brings us, I will always be thankful to God for the time he has given me with you. You will forever be the man who gave me a beautiful life.

A Diamond is Born 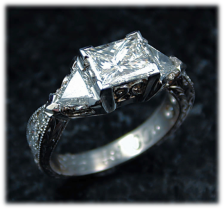 Deep in the mantle of Earth, a diamond is born.

Carbon, the once proud remnant of stars, is humbled beneath Earth’s surface. No longer does it grace the sky – illuminating space with honor and fervor. Its dignity is crushed beneath ancient rock; its fortitude tested by the seething heat of a capricious planet.

Nevertheless, clinging to ancestral pride, it will not relinquish its birthright and be consumed by the depths. Instead, it uses Earth’s own rage and might to grow, atom by atom, into a crystal – as hard and powerful as it is radiant. With each carbon bond the crystalline structure grows stronger. Infused with the unconstrained heart of the planet it connects earth and fire until a star is reborn.

In a fit of jealousy the volatile planet banishes the crystalized carbon from its mantel and expels it onto the surface. Forced from Earth’s bosom and left unprotected in the cold, its shape gains permanence, and millennia upon millennia it lies, abandoned and forgotten. Until, finally blessed by fate, it is unearthed from the volcanic wreckage. It is admiringly called “diamond” and given unconditional care. Cut into exquisite form, it sparkles with the remembrance of its once august place in the sky.

And now, my husband, you give it to me. A stone that, like myself, has survived unyielding fire, crushing pressure and interminable abandonment. And yet, discovered and loved by you, today we both once again shine with the brilliance of stars.

She reads books as one would breathe air, to fill up and live. -Annie Dillard

Coffee Mug. Blue Sky. Dreams. Khaleesi. I am no Stranger!

No matter what life throws your way, your actions, attitude, determination, and desire can make the impossible, POSSIBLE!

exploring how the world works and why it works that way ...

Everything under the sunshine

A cozy cottage for writers and book lovers

It's time to get hella serious about writing!

My writing and poetry helps me heal, honors our soldiers, and helps show you what we experienced.

"In order to succeed, we must first believe that we can." Nikos Kazantzakis

A journey to discover my own writing voice

WITHIN ARE PIECES OF ME

Stories about love to restore hope in people's hearts

Stories about love to restore hope in people's hearts

Words of Wonder, Worry and Whimsy

A personal exploration of autism from a brother’s perspective, including family relationships, philosophy, neuroscience, mental health history and ethics

Art and Ideas of Juan Navarro

Stories and photographs from places “further beyond”.

I May Be Some Time

"A Word of Substance"

Just a small town girl who writes about Christian stuff.

The beautiful picture of angels makes you happy.

memoirs of aly (the way i see it).