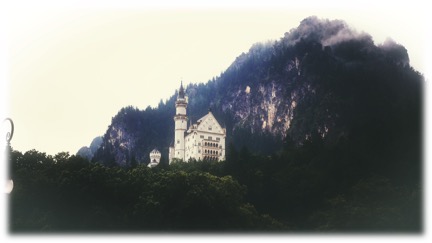 The tender spring grass was spiced with the smell of pine. Florence knew she must have a million of those pesky needles ornamenting her long, golden hair by now, but she didn’t mind. She lay on her back, her heavy damask gown spread out in feminine waves around her. A large wine red garnet accented by onyx adorned her chest and accented the smaller stones studding her waistband as it followed her hips down to an elegant V. While her head rested, supported by her two small hands, her blue eyes continued to enjoy the scene around her.

The blissful sun tripped and tumbled down the heavy-laden river. The trees above whispered among themselves about the impropriety of such a display while their little leaves, unconcerned with the serious nature of the moment, shimmered with unconcealed delight at the antics of passing clouds.

Lower to the ground tiny violet butterflies flitted from flower to flower. Florence wished she could hear the tiny faerie orchestra that must be accompanying this beautiful butterfly ballet. It would have made this moment complete. Alas, instead she was interrupted by the sound of a galloping horse.

Rupert frequently disturbed her reverie. His presence was not wholly unwelcome – though she did her utmost to convince him of the contrary whenever possible. Rupert’s spirited black stallion reared in protest as he came to a sudden stop near Florence’s sanctuary. Despite the snorting and commotion as Rupert dismounted Florence did not even deign to acknowledge his presence. In fact, this flashy entrance had become so commonplace that not even Florence’s white mare grazing nearby bothered to look up from her meal.

Rupert was instantly seated above Florence’s head. His chin rested impatiently on one knee while his dark eyes hastily searched Florence’s features for an explanation.

“What are you doing here?” he finally questioned sharply.

“I’m thinking,” Florence answered wistfully, still staring into the sky. “You should try it sometime.”

Rupert was not amused. “You shouldn’t be alone out here. What if something happened? What if the Norse happened upon you, or wolves, or…”

Florence pushed herself up with one hand, turned to her interrogator with a smile and used her other hand to re-order a few of his particularly angry curls. “I can take care of myself Rupert. Is that all you rode out here for? To lecture me on forest safety?”

“No.” Rupert returned angrily. His sword tore at the soft grass as he rose to his feet. “Though it would be nice if you listened just once.”

Florence giggled as she shook the forest floor from her hair. “The moment you start speaking sense I will be a captive audience.”

Rupert just shook his head and fetched her horse. Presenting her with the gentle mare he delivered his intended message, “My Lady, you are wanted back at the estate.”

“Why, thank you, My Lord,” Florence smiled as she alighted nimbly into the saddle. She rode with both legs gracefully draped over one side and her full skirt cascading over both saddle and mare. Rupert’s stallion was already trotting forward as Rupert leapt into the saddle to lead the way home.

Florence easily caught up to them, then pushed forward so that she led the way. Her form was that of an albatross gliding effortlessly on the wind’s current. Rupert leaned forward, sharpening his stance like a falcon before a dive. Florence’s eyes flashed with the delight of a challenge – the race was on.

She ducked under and around branches trying to gain an advantage, but surprisingly, Rupert stayed neck and neck. Once, she was convinced his horse had stumbled, but he quickly resumed his place crowding the narrow paths through the forest.

“Give up!” Florence jibed with a giggle. “You can’t win!”

“Never!” Rupert returned leaning in a little closer to his stallion’s perspiring neck. “I can’t just let you win –It’d be un-chivalrous of me.”

Florence began laughing so merrily that for a few moments Rupert actually began to gain an advantage. “Well, then I suppose I will have to beat you fair and square to preserve your honor, My Lord!”

Rupert cocked his head with a wry smile over his shoulder, “No way you can beat me!”

Florence’s laughter abated and she caught back up, “What?! You don’t think you can lose to a girl?”

Florence was about to smack Rupert with a snarky come-back when he grabbed her bridle, pulling her mare to a halt so suddenly she nearly fell off her horse.

“Shhhh!” he ordered forcefully, dragging her behind the wet carcass of a fallen tree. He then cautiously pointed to a glint of tempered metal through the undergrowth and a Norse crest.

“We have to get back to warn the citadel!” Florence insisted.

As she began to move her heavy dress rustled against the leaves. Rupert grabbed her arm. “Would you calm down! We need a plan before we get caught and have a ransom note sent to the citadel! In case you hadn’t noticed, they are kind of blocking our path home.”

“What!” Rupert gasped in a whisper. “Are you crazy? There are rapids between here and the citadel!”

“Come on! We’ll make a raft and tie the horses to either side.”

Florence hoisted her skirts and grabbed her mare’s bridle. She easily slipped among the trees like a panther. The only sound was the soft purr of her garnet that hung elegantly from her neck brushing against the ferns as she leaned over to avoid detection and the crackling of twigs under the horses hooves. Rupert followed close behind – his sword drawn and shimmering viciously in the filtered sun.

Finally, they made it to the river’s edge. Here the river moved along lazily – napping on fine silt and smooth stone. But, just around the bend it woke up energized and ready to play. Rupert could feel his body being smashed against the boulders with every piece of wood he lashed together.

“This is a terrible idea,” Rupert complained one last time. “We should stand up and fight.”

“Stand and die more like it.” Florence finished taking off her shoes and stockings and urged her horse into the river. Soon the lower quarter of her dress was afloat and a shriek escaped her – “So cold!”

Finally, the raft was ready, the horses tied to it, and the intrepid travelers on board. The journey began.

The horses walked them without incident to the bend in the river, but as soon as they reached the rapids they realized they had made a vital error. As the river began to wake up and speed through the forest the raft wished to go too. The horses could slow it – but this caused the raft to lurch about and they had forgotten to bring a stick of some kind to stabilize. They were quite literally up a river without a paddle.

As the raft began to buck more wildly the horses became nervous – particularly the stallion. The mare, seeing Florence in distress, was nearing the bank trying to get to her mistress and this caused slack on the line. In addition, Florence was having a harder time staying on the raft as her heavy dress filled with water. She began shivering from the glacial water and it took all her strength to fight the weight of her jewels and water logged fabric.

The mare couldn’t take it anymore and jumped in the frolicking rapids. This caused the raft to spin a full 90 degrees; the stallion revolted – breaking his tether; the raft flipped dumping its occupants into the river, and the mare realizing her folly climbed back onto the bank dragging the remainder of the wrecked raft with her.

Rupert couldn’t figure out which way was up for the first few minutes. Eventually the river tossed him to the surface and he stole a beautiful, begrudging gasp of atmosphere. Miraculously, he still had his sword and he managed to wedge it between two boulders as he tumbled by them. Using all his strength to hold on to the hilt, he buckled his leather belt around the sword to secure himself in place.

Next, he began calling for Florence. He knew time was running out. If he couldn’t find her soon he wouldn’t find her. “Florence! Florence! Come out! This was your stupid idea! Enough already!”

He felt something brush past his leg. Reaching down he grabbed a fistful of – hair! He pulled it out of the water. It took him a few minutes to find the shivering face underneath all those matted, tangled curls, but when he did she was still smiling. “I told you we’d live!” She gloated.

He couldn’t argue with that. Using his sword they climbed out of the river together and onto the crisp, warm bank.

“Well, Florence. That was some idea,” Rupert admonished playfully as he collapsed against an inviting pine.

“Plenty more where that came from.”

Florence was about to answer when a voice echoed through the woods, “Katy! Katy!”

First faint – then louder and clearer, “Katy! Its time to come inside!”

The trees disappeared. The horses were gone. Florence and Rupert sat hidden under a patio table.

“I guess I have to go,” Florence dropped her big, blue eyes to the ground. “Mom’s calling me for dinner.” Her forlorn expression, golden pigtails, and drenched summer dress were all beautifully reflected in the growing pool created by the garden hose at their feet.

“I told you that you were wanted at home. Its ok. We can play after school tomorrow,” Rupert smiled. “I’m sure we can get to the citadel this time.” Then he leaned over and quickly kissed her cheek. “See you tomorrow!”

Her eyes got even bigger than usual for a minute and then, in a fit of delighted giggling, she ran home.

Rupert stood up, put his hands in his pockets, and watched her run home with a sigh. He couldn’t wait for tomorrow’s adventures. Hopefully, she’d let him actually battle the Norse tomorrow.

Claire believes that to tell a story you must listen to one first. Her books and stories are fictional tales based on the emotions and experiences of individuals who have shared their own stories with her. She is passionate about giving a voice to those who are not heard by creating fictional events and then bringing them to life with true human experiences. END_OF_DOCUMENT_TOKEN_TO_BE_REPLACED
This entry was posted on Monday, July 13th, 2015 at 6:32 AM and tagged with Short Stories and posted in Fiction, Short Stories. You can follow any responses to this entry through the RSS 2.0 feed.
Reassembling the American Dream »

She reads books as one would breathe air, to fill up and live. -Annie Dillard

Coffee Mug. Blue Sky. Dreams. Khaleesi. I am no Stranger!

No matter what life throws your way, your actions, attitude, determination, and desire can make the impossible, POSSIBLE!

exploring how the world works and why it works that way ...

Everything under the sunshine

A cozy cottage for writers and book lovers

It's time to get hella serious about writing!

"In order to succeed, we must first believe that we can." Nikos Kazantzakis

A journey to discover my own writing voice

WITHIN ARE PIECES OF ME

Words of Wonder, Worry and Whimsy

A personal exploration of autism from a brother’s perspective, including family relationships, philosophy, neuroscience, mental health history and ethics

Art and Ideas of Juan Navarro

Stories and photographs from places “further beyond”.

I May Be Some Time

"A Word of Substance"

Just a small town girl who writes about Christian stuff.

The beautiful picture of angels makes you happy.

memoirs of aly (the way i see it).

& walking at the same time